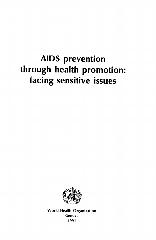 Explores the reasons why efforts to educate and inform the public about HIV infection so often fail to alter attitudes or persuade groups at risk to change their behaviour. Because AIDS evokes so many emotionally-charged reactions, the book concentrates on the need to understand how personal values, attitudes, and feelings may colour reactions to health messages and thus have a major impact on their credibility and persuasive power. To this end, the book presents eleven case studies illustrating the ways in which emotional factors have influenced the success of educational programmes. Representing a diversity of cultural settings and communication techniques, these case studies are intended to help health promotion planners understand the complexity of emotional reactions to AIDS, anticipate their impact, and design health messages accordingly. Information ranges from an evaluation of the effectiveness of factual as opposed to dramatic mass media campaigns, through advice on how to organize the public appearance of someone infected with AIDS, to a discussion of the subtle reasons why groups at high risk may reject a health message as personally irrelevant. Case studies are presented in four main groups. The first group, headed starting with ourselves , addresses the need for health promoters to recognize and deal with their own instinctive reactions to AIDS. Studies in the second part consider how emotional responses to AIDS in different target audiences can be used to increase the effectiveness of educational messages. Topics include the use of qualitative research in AIDS prevention, major lessons learned from anti-smoking and other health promotion campaigns, the successes and shortcomings of Australia's grim reaper mass media campaign, and the use of theatre to confront sensitive issues. Advice on the use of peers and patients as health promoters is presented in the third part, which describes projects conceived and implemented with the support of prostitutes, patients, and their families and friends. The final part illustrates ways to enlist the support of decision-makers and gatekeepers who can help or hinder health promotion. A study of AIDS education in schools notes the importance of including all potential opponents at the planning stages, while a report on government resistance to AIDS education in Ghana shows how the production of a video helped change official opinion

Published by the World Health Organization in collaboration with the Royal Tropical Institute, Amsterdam
WHODOC
78 p.