The role of health centres in the development of urban health systems : report of a WHO Study Group on Primary Health Care in Urban Areas [‎meeting held in Geneva from 2 to 9 December 1991]‎ 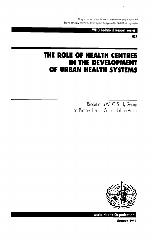 Considers what can be done to improve the quality of urban health services and make them more accessible to residents in low-income areas and slums. Noting that a shortage of resources for urban health is a problem everywhere, the report concentrates on organizational and administrative changes that can upgrade the quality of health centres, extend coverage to underserved populations, and reduce the inefficiencies that occur when hospitals are overburdened by patients suffering from minor complaints. The objective is to help health administrators and municipal authorities analyse the weaknesses in urban health systems, appraise options for strengthening primary health care, and introduce interventions that help obtain the maximum health gains from restricted budgets. Throughout the report, experiences in different cities around the world are used to illustrate both the shortcomings of many urban health systems and the specific changes that have brought improvements. The opening sections identify key issues in the organization of urban health systems and review the extent to which health systems in the worlds cities are providing primary health care, particularly for low-income communities. Details range from a list of mistakes frequently made by municipal and public health authorities, through an explanation of methods for collecting basic data, to a series of 10 questions to be asked when moving from an analysis of problems to a programme of action. Noting that almost half of the residents of cities in developing countries live in conditions of extreme poverty and squalor, the report cites evidence of an impending health crisis as urban populations continue to grow and the incidence of chronic diseases rises alongside traditional health problems and the added burdens of HIV infection and AIDS, alcohol and drug abuse, and injuries caused by violence and road accidents. The report also identifies weaknesses in urban health centres and health posts, which frequently suffer from a low standard of services and lack of credibility, and are often bypassed, resulting in an overloading of hospital services. Against this background, the report introduces the concept of reference health centres that would provide an extended range of high-quality, round-the-clock health services in defined catchment areas and link with hospitals for referral support. According to this concept, an urban reference health centre aims to support and strengthen local health centres in their role as providers of primary health care and to bring comprehensive medical care to local communities, making health services accessible to all city-dwellers on a more equitable basis. A review of experiences to date in developing such centres in various urban settings underscores the potential contribution that reference health centres can make to urban public health