Diet, nutrition and the prevention of chronic diseases : report of a WHO study group [‎meeting held in Geneva from 6-13 March 1989]‎ 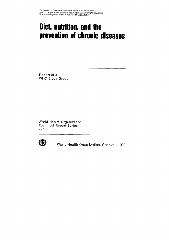 Records the consensus reached by a group of experts commissioned to examine the strength of evidence linking dietary factors to the development of several chronic diseases, including coronary heart disease, hypertension, stroke, cancer, diabetes, and osteoporosis. The experts were also asked to issue advice on prevention consistent with both the strength of scientific evidence and the magnitude of health problems associated with dietary factors. Although emphasis is placed on diet-related chronic diseases, the persistent problem of nutrient deficiencies is also considered. The opening sections assess epidemiological data linking changing patterns of disease to changes in diet and summarize what is known about the place of specific nutrients and dietary factors in the etiology of chronic diseases. Having confirmed the link between dietary factors and disease and assessed the magnitude of the problem, the report turns to the question of prevention. In one of its key achievements, the report issues a series of population nutrient goals , put forward as a universal guide to the nutrient intakes needed to prevent all diet-related diseases and appropriate for application in all countries throughout the world. Lower and upper intakes are set for each of the main nutrient groups. Expressed as a proportion of total energy, this recommended safe range of intakes specifies the minimum intake of a nutrient needed to prevent deficiency diseases and the maximum intake that should not be exceeded in the interest of preventing chronic diseases. The report is explicit in its insistence on the need for a population-wide, as opposed to individualized, approach to the prevention of diet-related chronic diseases. The remaining sections, devoted to food policies, explain why current policies governing food production and supply are essentially agricultural policies driven by economic and political issues. A review of the evolution of these policies, most of which were formulated in the 1940s, reveals roots in nutritional concepts based on the need to prevent deficiency diseases and thus ill-equipped to protect populations from the many diseases now linked to nutrient excesses. Advice on the adaptation of these policies concludes the report