JavaScript is disabled for your browser. Some features of this site may not work without it.
Get the latest COVID-19 technical guidance, scientific and policy briefs here.✕

Governing Body matters: Review of the Draft Provisional Agenda of the 146th session of the WHO Executive Board 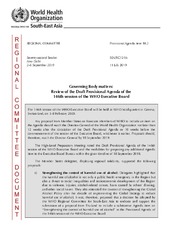