JavaScript is disabled for your browser. Some features of this site may not work without it.
Get the latest COVID-19 technical guidance, scientific and policy briefs here.✕ 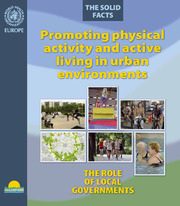 People’s participation in physical activity is influenced by the built, natural and social environments in which they live as well as by personal factors such as sex and age and ability, time and motivation. Local governments have a crucial role to play in creating environments that promote opportunities for physical activity and active living. This booklet concisely overviews the best available evidence on physical activity in the urban environment and makes suggestions for policy and practice based on that evidence.