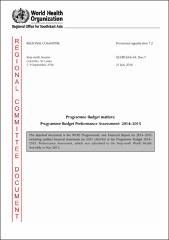 SEA/RC69/6: The Organization-wide report on the 2014–2015 Programme Budget Performance Assessment (‎PBPA)‎ was submitted to the Sixty-ninth World Health Assembly in May 2016 (‎SEA/RC69/6 Inf. Doc. 1 – Document A69/45)‎ after it was initially reviewed at the Twenty-fourth Meeting of the Programme Budget and Administration Committee (‎PBAC)‎ of the Executive Board. The PBAC, in its report to the World Health Assembly (‎SEA/RC69/6 Inf. Doc. 2 – Document A69/62)‎ welcomed the Unified 2014–2015 PBPA Report contained in document A69/62. The first part of the report provides the overview of the major health challenges that emerged during the biennium, including WHO’s response to them. The second part sets out the financial report for the biennium, including the audited financial statements for 2015. The Committee noted the achievements made by the Organization, and also took note of the uncertainty of the long-term financing of WHO’s Budget, the financing of staffing for the Global Polio Eradication Initiative after 2019, the long-term liability for after-service health-care costs, and the long-term infrastructure needs. The attached document provides a summary of the findings of the 2014–2015 Programme Budget Performance Assessment exercise as conducted in the WHO South-East Asia Region. The Ninth Meeting of the Subcommittee on Policy and Programme Development and Management (‎SPPDM)‎ reviewed the document and made the following recommendations: Action by Member States (‎1)‎ Continue the discussions on and advocacy for increasing the Assessed and non-earmarked Voluntary Contributions.Actions by WHO (‎1)‎ Continue to implement the Twelfth General Programme of Work and attempt to align the biennial indicators with the SDG targets. (‎2)‎ Support Member States that are unable to utilize resources and speed up utilization. (‎3)‎ Include in technical meetings at least one session where donors can be encouraged to provide more resources for priority programmes. The background document and recommendations of the SPPDM is submitted to the Sixty-ninth Session of the Regional Committee for its consideration and decision.
SEA/RC69/6 Inf. Doc.1: The attached document is the WHO Programmatic and Financial Report for 2014–2015 including audited financial statements for 2015 (‎A69/45)‎ of the Programme Budget 2014– 2015: Performance Assessment, which was submitted to the Sixty-ninth World Health Assembly in May 2016.
SEA/RC69/6 Inf. Doc.2: The attached document (‎A69/62)‎ is the Report of the Programme, Budget and Adminstration Committee of the Executive Board to the Sixty-ninth World Health Assembly, on the Programme Budget 2014–2015: performance assessment.